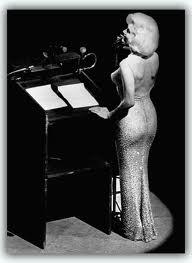 Marilyn Monroe was one of many well-wishers from the entertainment world who paid tribute to President Kennedy at Madison Square Garden on May 19, 1962, on the occasion of his 45th birthday.  (Actually, his birthday was ten days later.)  However, because of her slinky "va-va-voom" gown and breathy singing of "Happy Birthday", only Marilyn's appearance is remembered.  Curiously, First Lady Jackie Kennedy wasn't among those in attendance that evening.  (Ironically, she died on this very date in 1994). 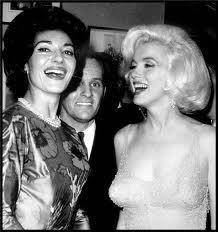 Looking back, this performance was quite audacious for its time.  (And it's been a part of every gay man's repertoire ever since.)  Back then, however, who knows how long it took for Marilyn's performance to be communicated to the general public.  Perhaps her appearance was muted to a degree because she was one of a roster of performers that night, among them Ella Fitzgerald, Peggy Lee and Maria Callas (pictured).

That evening Marilyn was very late for her appearance and in a creepy bit of foreshadowing, master of ceremonies Peter Lawford (one of the president's brother-in-laws) introduced her as the "late" Marilyn Monroe.  Shockingly, less than three months later she would be dead.  To view this classic performance, double click here.

I would love to see Cher do 'Happy birthday Mr President', for Donald Trump...She is so talented and I think it would unite the country.