I'm not a big book reader but I just finished reading one that had me captivated.  The book is Running in Bed.   No, it's not a sequel to Augusten Burroughs' Running With Scissors, but rather the semi-autobiographical debut novel by Jeffrey Sharlach which arrived in bookstores a few weeks ago (Spring 2012).  It recounts the life of gay protagonist Josh Silver during his early years as an adult living in New York between 1977-1987.  It touches upon coming out, work life, sex, romance, and the AIDS crisis. 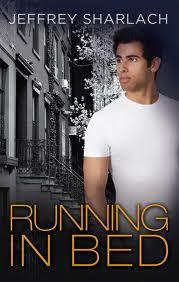 Since I often write about my own memories and experiences on my blogs, it was refreshing to read someone else's, especially since the character Josh's experiences were somewhat similar to mine, e.g., we both moved to New York in the late '70s to work in advertising, and we lived in Greenwich Village.  One big difference was that he immediately took a summer share in the Pines, while I waited until the mid-1990s.

The novel mentions a lot of familiar places, e.g., Sandolino's restaurant; Uncle Charlie's Bar; Balducci's; Company restaurant;, the Ice Palace disco on 57th St.; Driftwood Walk in the Pines, et al.  However, although the story begins during the hedonistic, sex-fueled late '70s, Josh doesn't explore the baths or Fire Island's Meat Rack, which were rights of passage for many gay men back then - and key plot devices in Larry Kramer's and Andrew Holleran's acclaimed novels Faggots and Dancer from the Dance, respectively. 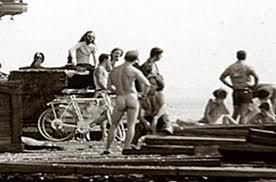 The story would have benefited from more scrupulous fact checking.  For instance:

Nonetheless, despite these quibbles, I thoroughly enjoyed reading the book and found it time well spent.