Sports stars regularly call press conferences to dispel rumors about dissension in the clubhouse or to deny the fathering of an illegitimate child, or raping a woman they invited back to their hotel room.  However, never before had an A-list star spoken to reporters about his sexual orientation - until May 22, 2002.  On that day New York Mets All-Star catcher Mike Piazza held a press conference to end talk running rampant that he was gay. 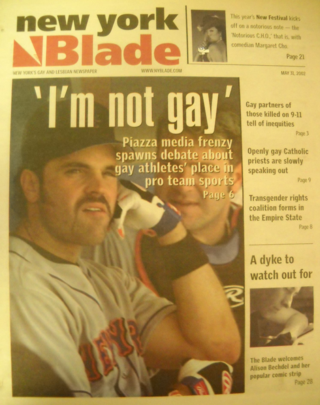 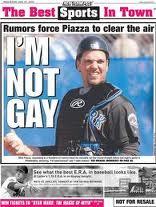 The issue of his orientation had been brought to a head by an article in Sports Illustrated in which Mets manager Bobby Valentine opined that Major League Baseball might be ready to have openly gay players on team rosters.  Some thought he may have been alluding to Piazza to pave the way for his coming out.  As it turned out, not true. 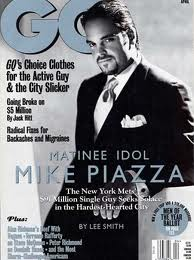 After all, some rumors had him paired with WABC-TV weatherman Sam Champion (who later went to Good Morning America, married his Brazilian boyfriend and then moved onto The Weather Channel).  And then there was the time when he went all Jean Harlow and sported a blonde coif!  Of course, despite the 34-year-old bachelor's denials, and subsequent marriage three years later, some still beg to differ.