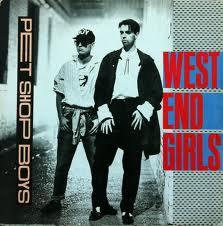 The Pet Shop Boys is a British duo comprised of Neil Tenant and Chris Lowe.  Their first single,  West End Girls, went all the way to #1 on the Billboard Hot 100 the week of May 4, 1986.  They would have a number of other top-10 hits (including their duet with Dusty Springfield, What Have I Done to Deserve This?, which peaked at #2), but never another chart topper.  Despite their initial success PSB never achieved the level of mainstream success on our shores that they had in the U.K.; however, they did attain a lofty level of popularity among Uncle Sam's gay population.  Gay men embraced PSB's mix of theatrical electronica, catchy pop numbers with a political message and achingly beautiful ballads.  (I have 83 of their songs on my iPod.) 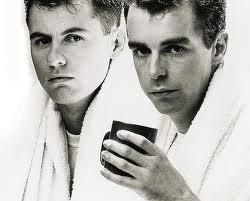 Their limited popularity in America was likely due to the duo's sexual orientation, which was often reflected in the lyrics of their songs (especially a number of haunting melodies alluding to the AIDS crisis).  However, back in the 80's it was unheard of for entertainers to be "out" and the Pet Shop Boys were no different - but their gay followers were wise to their true nature.  Not until the mid-90's did Neil Tenant acknowledge his orientation - and Chris Lowe has always played coy.

In 2006 I saw PSB in concert at Radio City Music Hall but was disappointed by the lack of imagination and lack of much in a way of a stage presence (especially disappointing considering how inventive their videos were).  I suppose I was spoiled by the athleticism displayed by Madonna during her performances.