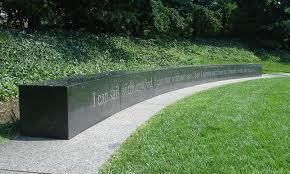 Lately there's been a lot of fuss made over the AIDS Memorial Park planned for the triangle of land across the street from the shuttered St. Vincent's Hospital.  Curiously, its developers and supporters (including celebrities such as Susan Sarandon and John Cameron Mitchell) talk as if it will be the first one in the City.  However, there's been an AIDS memorial in New York since 2008.  It's part of Hudson River Park, and is situated near the Bank St. entrance at Pier 49.

It's a low-slung bench/wall of dark-gray granite two feet high and 42-feet in length.  On it is carved a verse from a Swedish folksong that reads: "I can sail without wind, I can row without oars, but I cannot part from my friend without tears."  The memorial also incorporates a small lawn, a gently curving walkway that extends out over the river (pictured, below), and more than one hundred wooden pilings from the old pier that poke out of the water. 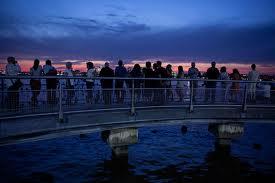 I attended the memorial's dedication on the rainy Sunday following Thanksgiving in 2008.  Openly gay, and HIV-positive, New York State Senator Tom Duane attended, NY1 cable news reported on the event, and an article about it appeared in the New York Times the following day ("A Quiet Place to Remember Lost Friends").  Its understated beauty offers a lovely place for contemplation and remembrance (especially at sunset).  Although the new memorial park will certainly receive more visitors due to its location, let's not overlook this small gem of a memorial sitting along the Hudson. 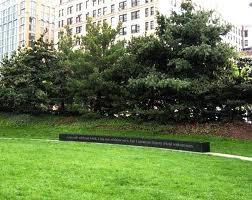