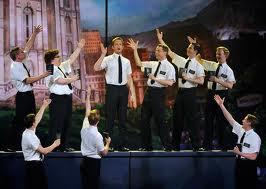 Although the opening number from The Book of Mormon was delightful, host Neil Patrick Harris' opener What if Life Were Like Theater was weak compared to last year's cheeky Broadway - It's Not for Gays Anymore!  And I thought the entire show was rather lackluster compared to last year's gay-gay-GAY telecast.  (The commercial for Les Miz packed more of an emotional punch than most of the show.)

I was delighted by Judith Light's win for Best Featured Actress in a Play for Other Desert Cities.  She's been a tireless champion of gay causes.

There were very few gay references.  And just one person during his acceptance speech, Newsie's lyricist Jack Feldman, thanked his same-sex partner.

Both times Harvey Firestein was shown in the audience he was chewing gum a la Britney Spears.

Danny Burstein's number from Follies was rather tepid (despite his colorful outfit).  Perhaps it was due to the fact that the show closed some time ago.  (I thought it awkward that Bernadette Peters, looking distracted, was chosen to introduce the number since she was the only leading actor in the show who didn't get a nomination.)  For me the show's most rousing numbers were those from Newsies and the montage of Gershwin classics from Porgy & Bess.

Has there ever been a Tonys ceremony where two award winners lost parents so recently?  Judy Kaye (Nice Work If You Can Get It) lost her father last week while Steve Kazee's mother died on Easter Sunday.  Both gave touching tributes.

Congrats to Hugh Jackman for his "See, I Have a Wife and I'll Kiss Her on Stage To Prove I'm Straight and Don't Have a Boyfriend on the Side" award.

It was painful watching puffy and lead-footed Matthew Broderick performing his number from Nice Work, especially for those who remember the lithe Tommy Tune performing the very same number nearly 30 years ago in the musical My One and Only.  And where was Broderick's wife, Sarah Jessica Parker?  Perhaps on location filming another one of her critically panned movies.

After gushing about how thrilled she was to have written the score for the upcoming musical version of Diner presenter Sheryl Crow then proceeded to race through the nominees for best score in record time.

This year's "Who Invited Her?" award (which went to Christie Brinkley in 2011) was given to Tyler Perry.

That had to be the thinnest Tracy Turnblad in Hairspray history.

Viewers could be forgiven if they thought the musical was called Che rather than Evita since in the number that was performed Elena Rogers, the actress who plays Eva Peron, had one line.  And I was struck by her close resemblance to the character Frau Farbissina from the Austin Powers movies.

The coupling of Patti Lupone and Mandy Patinkin as presenters was touching and their patter was sweet, but the best presenters of all were the last, Book of Mormon co-creators Trey Parker and Matt Stone (without the third co-creator, Robert Lopez), who presented this year's award for Best Musical.