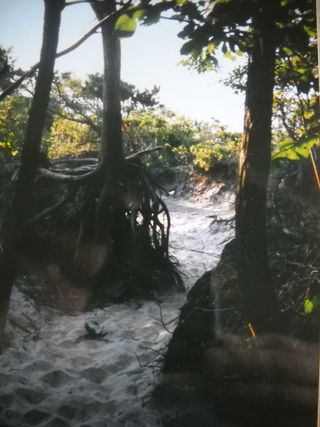 There are three ways to travel between the gay Fire Island communities of the Pines and Cherry Grove: take a walk along the beach, hail a water taxi or traverse the inland route.  The expanse of inland sand dunes and wind-twisted shrubs/trees is known as the "Meat Rack" (also referred to as "The Enchanted Forest" or just the "Rack").  Some use it purely for utilitarian purposes to get from point A to point B while others go there to fulfill animal urges.  (Some mix the two and make a pit stop on their way to point B.)  Like craters on the Moon, sections of the Rack have been given names, such as "Area 51", "Lower Dining Room", and "Upper Dining Room".

A song on the Village People's first album was titled Fire Island and the chorus was, "Don't go in the bushes, someone might grab you".  Besides being a place where sweaty, moaning bodies congregate, the Meat Rack is also a place of natural beauty.  It's great being there when there's a full moon reflecting off the white sand of the dunes with the crashing surf in the background.  I remember fondly one particular night when the moon came rising through the fog and emerged a beautiful orange. 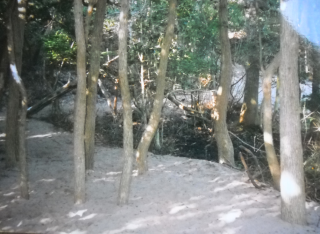 The entrance from the Pines side, a winding path with tall trees on either side calls to mind, especially at night, a stage set from Into the Woods or an illustration from the fairytale Hansel & Gretel.  (The first time I ever ventured there at night the movie Blair Witch Project kept coming to mind.)  For novices it's a good idea to first visit during the day to get the lay of land before venturing out after dark. 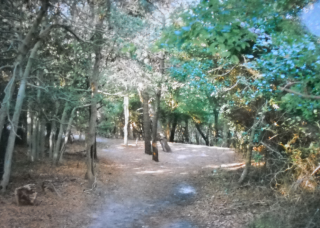 Entrance path from the Pines

Mosquitoes, ticks, sand fleas that bite the ankles, and swampy areas are some distractions that can lessen one's enjoyment of their Rack experience.  (A housemate constructed a famous bridge over one swampy area and used to repair it every season.)  "Day trippers" who stop and stare (or shine flashlights at night) are another constant annoyance.  And there's always the possibility of bumping into a friend or a friend's boyfriend - but then, the same can happen in the City at a sex club. 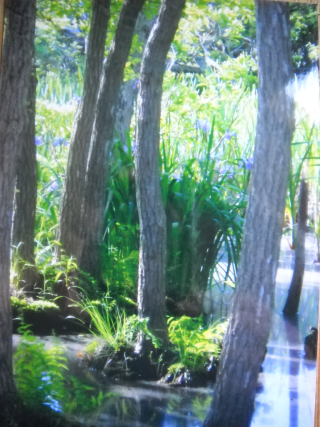 Earlier in this post I alluded to how the setting of Sondheim's Into the Woods very much resembles the Meat Rack.  And lyrics to one of its songs seem to have been written by someone who knows the Meat Rack mindset very well: "Anything can happen in the woods; let your hesitations be hushed"; and "Right and wrong don't matter in the woods, only feelings.  Let us meet the moment unblushed."

Of course, the various adventures housemates have had during a "nature walk", the magical as well as the humiliating, provide plenty of fodder for hilarious stories to share over dinner.