Singer Elton John forever sullied his reputation with many of his LGBT fans when he performed for right-wing radio personality/blowhard Rush Limbaugh on the occasion of his fourth marriage on June 5, 2010.  For this act of treachery John was reportedly paid a cool $1 million to help Limbaugh celebrate the flouting of his marriage vows (the sanctity of marriage, indeed!). 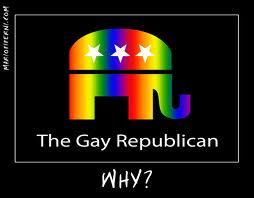 In Limbaugh we have an individual who has built his reputation on spewing forth mistruths and hateful insults - and not limited to the LGBT population.  Meanwhile John's nauseating shilling brought to mind gay Republicans who say they chose to be affiliated with the party not because of its views on LGBT issues, but rather because they support its economic platform.  (Of course, Elton isn't an American citizen.)  Some gay men liked to be pissed or spit on, some are into cock and ball torture, and then there are those who are Republicans.

I'm sure Ann Coulter now has John on speed dial - in the unlikely event she finds a man to marry.