After two test issues met with encouraging results, Martha Stewart Living was launched as a bi-monthly magazine with a July/August 1991 issue.  It hit newsstands on June 10, 1991 - with Martha looking like a grown-up Debbie Gibson!  Gay men clamored for it because the multi-talented Martha instructed us on the art of gracious living.  The publication quickly found itself on coffee tables in City apartments and Fire Island shares where it was pored over at poolside or on the beach along with Vanity Fair, Bon Appetit and The New Yorker.  I'm not a cook or decorating type, but even I enjoyed paging through it because it was beautiful to look at - and I was mesmerized by the photos of meticulously decorated cookies and cupcakes.  She was truly a domestic goddess. 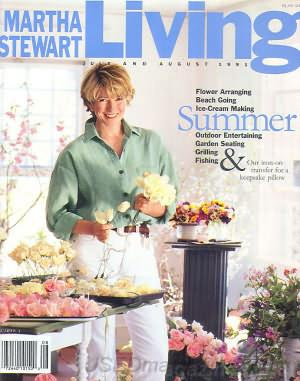 A large part of the appeal of the magazine was that every page was a personification of Martha - a talented, hard-driving perfectionist and savvy businesswoman.  What is it about "bitch goddesses" like her that gay men find so appealing?  Most likely, it's because we appreciate smart women with a vision who know how to achieve it without being hindered by men.  (It's quite amusing to see a woman make straight men squirm.)  That's been the key to success for other female movers and shakers as well, such as Madonna, Hillary Clinton, Oprah, Eva Peron, and Anna Wintour (and her fictional doppelganger, Miranda Priestly).

The magazine immediately met with success and soon it was publishing ten issues a year.  Within six years its circulation had rocketed from 500,000 to 2.3 million, making it one of the nation's twenty-five largest magazines.  Few new magazines have been such an out-of -the-box success (one exception was Oprah's magazine, which launched in 2000.)  And this was just one part of her empire, which would also include cookbooks; special interest publications for babies, weddings and holiday entertaining; a TV series and numerous guest appearances on TV shows; and product tie-ins with K-Mart, Macy's and JC Penney.