The issue of Newsweek that was on newsstands the week of June 15, 1993 (June 21 cover date) was titled: "Lesbians, Coming Out Strong:  What Are the Limits of Tolerance?"  Featuring a lesbian couple on the cover (Catherine Angiel, and Ashley Herrin), the article largely contrasted stereotypical "butch" lesbians with more feminine "lipstick" lesbians, who were more likely to go undetected by the general population.  In the eyes of many gay readers, the story served mostly as a primer for straight society on the world of lesbians. 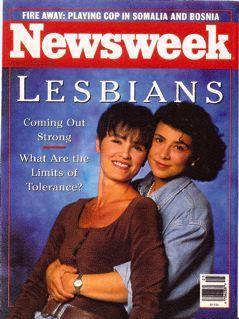 Twenty years later Catherine Angiel (the woman on the cover with the short hair) owns a high-end jewelry shop in New York's Greenwich Village called catherine Angiel (formerly known as Gallery Eclectic).  She and Herrin split a number of years after they appeared on the magazine's cover, and no information is available about Herrin's whereabouts. (By coincidence, for two years in the early 1990s I lived in an apartment in the building above the store.) 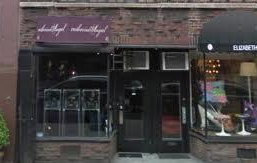 Three years later Newsweek would publish another cover story about lesbians that reported on the trend of them having children and raising families (rocker Melissa Etheridge and her partner Julie Cypher were the cover subjects this time).

Here are other ZeitGAYst posts about gay themed cover stories in Newsweek you may find of interest: