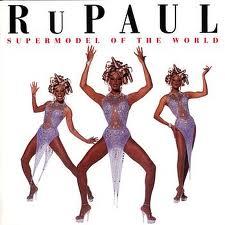 Four months after RuPaul's fabulously catchy and campy single Super Model (You Better Work) hit clubs, radio airwaves and MTV the 6'4" (without heels) drag performer's debut CD Supermodel of the World was released the week of June 8, 1993.  And in gay circles the phrase "Shante, shante, shante!" was the "it" phrase of the year.  For the rest of the 1990's he seemed to be everywhere flashing his megawatt smile.  (I was especially enamored by his cameos in the two Brady Brunch movies as guidance counselor Mrs. Cummings!)

Twenty years later the 51-year old RuPaul Andre Charles (pictured, left) still has an active career and is presently hosting RuPaul's Drag Race on Logo TV.  Only Madonna, the Pet Shop Boys and Liza have been going at it longer.  He certainly has taken the edict "You better work" to heart.