Author David Leavitt (pictured) was only 25 when his novel The Lost Language of Cranes was published in 1986.  Six years later it aired on PBS on the evening of June 24.  (Cranes was produced by the BBC and first aired in the UK in 1991.)  It tells the story of a young man, Philip, who comes out to his parents and later learns that his father is a closeted homosexual.  Although the novel is set in New York City, the movie, perhaps because it was produced by the BBC, takes place in London.  When it aired in the US a number of scenes showing frontal nudity were edited out. 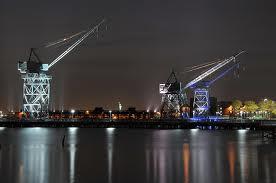 I wasn't familiar with the novel so it wasn't until I watched the PBS telecast that I learned that the "cranes" weren't the birds but rather mechanical ones at seaports that lift cargo in and out of ships.  (However, this is never fully developed to show how it tied into the story.)  An interesting subplot concerns Philips boyfriend who is the adopted son of a gay couple, which seemed quite progressive for the early 1990's.  (One of the father's was played by openly gay director John Schlesinger.)

Before Cranes there had been TV movies in which either a child or a parent dealt with his/her homosexuality, but this was the first to have a parent and a child both coming to terms with their homosexual nature.  As the movie ends life for father and son appears to hold promise but the wife/mother is left with perhaps the greatest challenges.  (One line of dialogue I remember most vividly was spoken by Philips exasperated mother in response to her husband's revelation and the fact that her son is also gay.  She says "My life's the punch line of some stupid joke.")