Despite the grim title of TIME Magazine's cover story which hit newsstands on June 27, 1983, the tone of the article wasn't all doom and gloom.  Although knowledge about the AIDS virus was minimal at this early stage the article reassured readers that the U.S. medical establishment would surely come up with a cure in the not too distant future.  It turned out to be a very naive assumption. 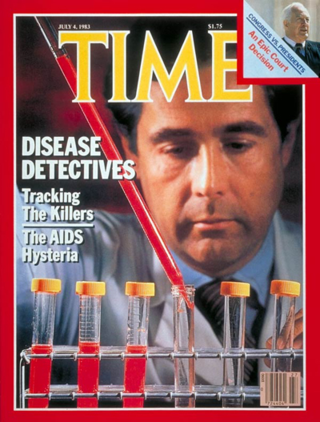 In the summer of 1983 only two years had passed since the first few cases of AIDS were diagnosed and the number infected was still relatively low.  However, in the gay community, especially in New York and San Francisco, a quiet feeling of dread was building.  (I remember how practically any illness would cause panic among my friends.)

It would be another two years before the number of cases took off. Deaths then climbed steadily in each of the next 10 years until a class of drugs known as protease inhibitors was introduced. These drugs were the first effective treatment in keeping the AIDS virus at bay in many of those infected.  However, some 20 years later a cure has yet to be found.