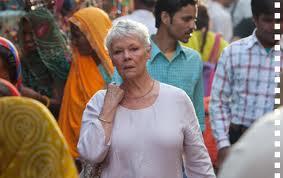 When I first saw the trailer for the movie The Best Exotic Marigold Hotel back in the winter I had no interest in seeing it.  It seemed to be yet another movie about a group of quirky Brits who learn to let their hair down in a foreign culture.  Then last month I read a review of it in New York's gay entertainment magazine Next and it mentioned a gay subplot involving the character played by Tom Wilkinson.  That piqued my interest, so when a friend mentioned seeing it I was amenable.  This subplot was largely ignored in the trailer (and when I looked for some photos of those scenes online to include in this post I couldn't find any). 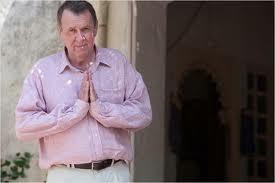 The subplot is very touching and despite being unheralded it received a good amount of screentime.  In fact, just writing about it tears me up.  It culminates in a reunion scene that reminded me somewhat of the one between Ennis Del Mar and Jack Twist in Brokeback Mountain.  Besides this subplot I also really enjoyed looking at some of the sexy male Indian actors.  And then there was the Dames - Judi Dench and Maggie Smith.  (Another role was played by Penelope Wilton, the actress who portrays cousin Matthew's mother in PBS's Downton Abbey.)

After seeing it I wrote on my Facebook page that "I laughed, I cried, I rolled my eyes".  Yes, the movie was a bit contrived, but it was delicious comfort food.  However, one thing the movie lacks is a great soundtrack like those of films such as Monsoon Wedding, Slumdog Millionaire or Bride and Prejudice.