On June 26, 2003 the U.S. Supreme Court ruled that Texas' same-sex sodomy law was unconstitutional. The landmark Lawrence v Texas ruling was decided by a 6-3 vote, with Justices Scalia, Thomas and Chief Justice Rehnquist the dissenting votes.  (Pictured are John Geddes Lawrence, far right, with fellow plaintiff Tyron Power.  Both have died since the decision.)  The ruling voided the remaining sodomy laws in twelve other states as well (including Florida and Michigan). This decision came 42 years after Illinois became the first state to strike down its sodomy law. 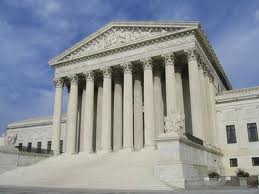 This ruling reversed the Court's infamous 1986 decision upholding Georgia's sodomy law (Bowers v Hardwick). Many legal scholars consider Lawrence v Texas one of the Court's most important rulings. Once same-sex relations were made legal it opened the way for making same-sex marriage possible - and the state of Massachusetts followed suit the following year.