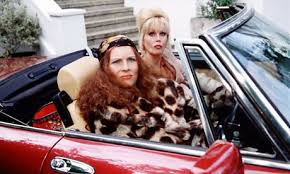 AbFab was embraced by gay viewers not only for the show's high-camp quotient but also because many identified with Eddie and Patsy's tireless pursuit of being hip and glamorous.  The humiliating fixes Eddie and Patsy got themselves into were not unlike those experienced by Lucy and Ethel or Laverne and Shirley - but with a touch more debauchery (and a lot more booze).  And although it appeared that Eddie and Patsy had no redeeming qualities (their lives were more pitiable than fabulous) viewers were occasionally reminded that they were the products of mothers who were either distant (Eddie's) or completely absent (Patsy's).

Some of my favorite AbFab memories:

In 1995 CBS produced a bowlderized version of AbFab called High Society, starring Jean Smart of Designing Women fame and Mary McDonnell (who later starred in the Battlestar Galactica TV series).  It aired on Monday but didn't catch on with viewers and aired just 13 episodes over two half seasons.