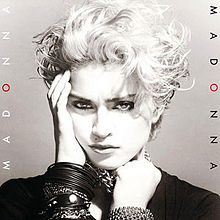 At the end of July 1983, a few weeks before celebrating her 25th birthday, Madonna released her self-titled first album.  However, it wasn't until 1984 that sales picked up steam.  That's when the album cracked the top 10 on Billboard's Top 200 Albums Chart, on the strength of her first top-20 single, Holiday, and two top-10 hits, Borderline and Lucky Star.  (The single Everybody was released nine months before the album but it didn't chart.)  Two other tracks, Burning Up and Physical Attraction, were popular in clubs.  1983 also marked the ascent of another gay icon, Cyndi Lauper.  And although Lauper's career started out more strongly, on the strength of her smash single Girls Just Wanna Have Fun, Madonna eclipsed her within a few years.  Her career took off following a memorable performance of Like a Virgin at the first MTV Music Awards in 1984. 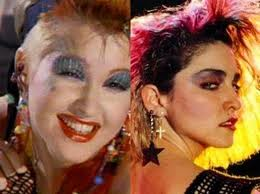 In addition to Lauper, Madonna also had competition from a number of other female singers in the mid-80s, such as Taylor Dane (top, below), Regina Alisha and Stacy Q (middle).  Dane had a string of hits, but after some initial success, the others' careers failed to gain traction. 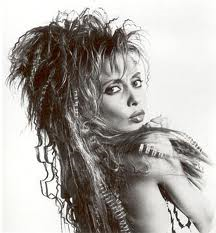 Madonna, however, was in a league of her own, constantly finding ways to create controversy, reinventing herself and demonstrating an uncanny ability to remain in the publc eye.  Like Lauper, her career was propelled by a devoted gay fan base.  And both performers have been huge supporters of gay causes, especially bringing attention to the AIDS crisis in its early years.  (Interestingly, the "gay cancer" was formally called AIDS by the CDC exactly one year before the release of Madonna's first album.)