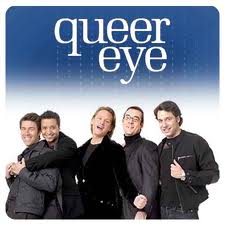 On the evening of July 15, 2003 the Bravo cable network premiered its new makeover show Queer Eye for the Straight Guy.  At first I was reluctant to tune in because I expected a show in which a group of catty queens mercilessly ridiculed their hapless subjects, but I was pleasantly surprised at how personable and helpful the team was.  And I think their advice was probably as helpful to gay guys as it was to straight guys.  The show had a very positive vibe and I looked forward to every episode.  The five engaging "queer guys" were: Carson Kressley (fashion advisor); Thom Filicia (interior design); Ted Allen (food & drink); Kyan Douglas (grooming); and Jai Rodriguez (culture).  Carson was the blonde cut-up, Kuyan the cute one and 24-year-old Jai, the youngest of the five by nine years, was sometimes the subject of ridicule by viewers because no one really knew what his function was.

I even tried something I saw on one of the episodes - a 15-second spray tan.  I bought a package of five from a neighborhood tanning salon but ended up using only three of them because I felt as if I was being doused with a cold spritz of insecticide.  Not quite as bad as waterboarding, but an unpleasant experience nonetheless. 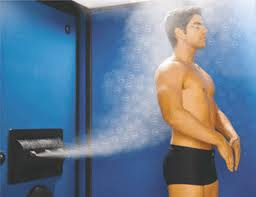 Alas, after talking off like gangbusters and becoming part of the zeitgeist Queer Guys burned itself out and the next season ratings took a nosedive (however, it did win an Emmy for best reality show in 2004).  The show lasted three seasons in total.  Of the "Fab Five", Kressley's on-camera career has been the most enduring as he's hosted other makeover shows, judged beauty pageants and even appeared in a holiday movie on NBC.  Ted Allen (near left) has also managed to stay in the public eye by publishing cookbooks and making regular appearances on the Food Network. 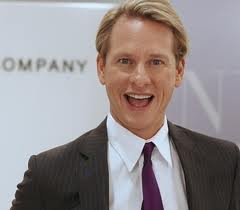 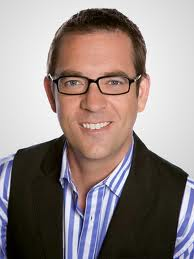