"Invasion" of the Pines: The Consequences of Refusing Service to a Drag Queen (July 4, 1976)

The Fire Island communities of Cherry Grove and the Pines have distinct cultures, with the Pines akin to Manhattan while the Grove has a more outer boroughs feel to it.  This difference was at the root of a legendary incident that took place in the summer of 1976.  After a group of drag queens from the Grove was refused service at a bar in the Pines an irate group of residents in the Grove boarded a boat and paid another visit to the Pines - in drag.

Now every 4th of July a raucous boatload of Grove residents, dressed in their most glittery finery and biggest hair, crowd onto a chartered ferry and proudly sail into the Pines' harbor to "invade".  However, unlike most invasions, it's not carried out under the cover of night but rather in the bright sunshine (hopefully) of early afternoon.

Upon arrival they're greeted by a welcoming (and largely barechested) throng, many of whom are attired in drag themselves.  As they disembark each queen is announced to wild cheers and iPhone photographs.  Some of the original witnesses to the 1976 slight still participate. 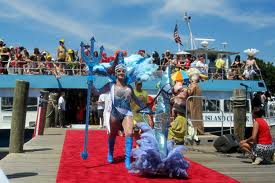 Anyone in drag (from either community) gets free drinks at Sip & Twirl, which can lead to some frightening (albeit amusing) spills off Fire Island Boulevard.  And even on the hottest 4th of Julys those particpating do their best to keep themselves as dewy-fresh as possible, dabbing beads of sweat from their decolletage in a very ladylike way.