The vast majority of troubled entertainers who have died prematurely, many of whom are gay icons, have been women, e.g., Marilyn, Judy, Billie and Dinah.  One of the few men on this list is actor Montgomery Clift.  He was found dead in bed in his New York apartment the morning of July 23, 1966; he was 45.  The cause of death was listed as a heart attack, but a major contributing factor was the cumulative effect of pain killers and liquor.

During the first half of the 1950s Clift was considered one of Hollywood's finest actors, but his life went into a tailspin after he was seriously injured in a car accident in 1956.  He made eighteen movies during his career and was nominated for an Oscar four times - but never took a statue home (Peter O'Toole and Richard Burton were each nominated seven times without winning).  The movies were: 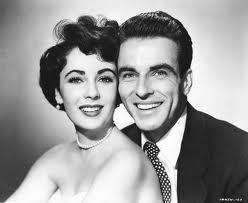 Long before his accident, Clift abused pills and booze.  Additionally, he was a closeted homosexual in the habit of picking up strangers and male hustlers, often finding himself in trouble that had to be cleaned up by his agent or movie studio.  He was moody, insecure and an outsider to Hollywood's A-list.  However, he counted Elizabeth Taylor as a close friend (they appeared together in A Place in the Sun; Suddenly Last Summer; and Raintree Country.

Clift was bi-sexual, not Gay. He loved women and was with women in close intimate relationships. He yearned for a family and children. He wanted a family of his own.

I loved Montgomery Cliff in the Howard Hawks film Red River Which also starred John Wayne in 1948.This was the first movie that I was privileged to see. I guess I must have seen this movie at least 25 times over the years and still enjoy it today.Ronald

A person Like Montgomery Cliff deserves our compassion. He seemed to struggle with his identity and just the fact that he was insecure shows his emotional suffering. He was an excellent actor, and most convincing in every role he played, from the beginning of his career. Two of his movies stand out; 'A Place In The Sun,' and 'The Heiress." He came across on the screen as very humble. Though I do not condone gay/lesbian/bi-sexual beings of life, it is none of our business and because he was so tormented, he deserves for us to give him the benefit of the doubt. My heart goes out to all people who struggle with what he experienced in life. I hope he is resting in eternal peace.

Eliza Blue - I certainly am aware there are bisexual people, but many supposedly bisexual people simply do not want the homosexual label. If Clift would risk his career and health way back in the 1940s & 50's when it totally taboo and illegal to boot to have homosexual encounters, I'd say he was probably homosexual. Wanting a family does not mean you're bisexual either. I love kids and if it wasn't for so many health problems, I would have adopted them long ago. But I have no desire to be sexual or emotionally attached (in marriage) to a woman. Just for reference - I met a very handsome Gay minister with kids. I asked him how that happened. He said a girl "serviced" him and it felt good, it was 40 years ago - he pushed his Gay feelings in the corner. Eventually he had to admit to her and himself he was Gay. Or mostly so. I realize this situation isn't every case, but a great great many.

Cliffs sexual preference is NO. ONES business!! He was a great actor!!

Terry - Movies, movie stars and gossip go together like bacon & eggs. It just goes with the territory.

Regardless of his sexual orientation, Montgomery Clift was a gifted actor who had an amazing ability to channel his characters in an authentic, believable way that made you like them. Even in 'A Place In The Sun'; in which his character performs a horrible and unthinkable deed for admittedly selfish reasons, he still comes across as sympathetic and likable. There aren't many actors who could pull that off, past or present. The fact that MC was raised by a staunch conservative father who showed no love, compassion or empathy for his son; he was physically and verbally abusive to Montgomery and treated him with disdain, is most likely the source of his insecurities and mental health issues, as opposed to his sexuality. Montgomery Clift was remarkable as an actor and that should be his legacy. RIP MC, thank you for sharing your awesome talent of channeling the regular guy onto the silver screen, thank you for entertaining us with us your talent.

Great actor with integrity no matter what his sexual preference. He refused to play the Hollywood game. A true artist. He had many iconic film performances and influenced many actors including James Dean. Sadly, he is barely remembered today

Clift was so believable in his roles, a truly gifted a actor. His ability to become his character was absolutely amazing!!