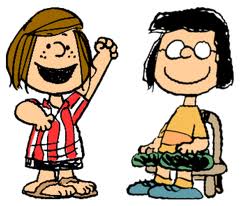 Here's a question that wouldn't look out of place on an SAT exam: Which pair doesn't belong?

Of course, the correct answer is Peppermint Patty and Marcie as they are the only duo with hints of a lesbian vibe between them.

Nearly 20 years before the smitten Waylon Smithers and Mr. Burns were introduced on The Simpsons, Marcie made her first appearance in the comic strip Peanuts as Peppermint Patty's devoted friend.  She was famous for always addressing Patty as "sir".  The strip introducing her ran on July 20, 1971.

While not as obvious as the deep crush Smithers has for his boss, Mr. Burns, there is something unspoken going on between the two girls - even if they are unaware of it (and Peanuts creator Charles M. Schulz denied it).  And the fact that the two of them have vied for Charlie Brown's attention suggests that their radars aren't working properly.  After all, what straight girl in her right mind would be interested in Charlie Brown?  ("Girly-girls" Lucy and Violet certainly aren't.)

And the debate rages on in the salons of Northampton, Smith College, Cherry Grove and the Cubby Hole in Greenwich Village.