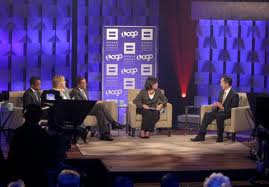 Only Kucinich (far right) and Gravel came out in support of same-sex marriage; the others favored civil unions.  The one gaffe of the night was when Bill Richardson (near right) said that he believed being gay was a choice.  He rescinded (or "clarified") his comment the following day.