How Gay Are You? A Checklist to Review
Ellen DeGeneres & Anne Heche Call it Quits (August 21, 2000) 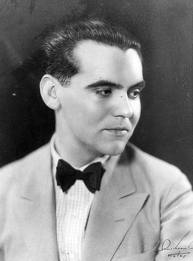 Just one month after the beginning of the Spanish Civil War one of Spain's most renowned poets, Federico Garcia Lorca, was executed on Aug. 19, 1936.  His body was dumped into an unmarked grave with those of a few others shot at the same time.  He was 38 years old.  There are a number of conflicting stories about the reason for his murder.  Some say it was for his leftist political views while others cite his homosexuality as playing a role.  To make his murder even more distressing, it has never been determined beyond a doubt where his body was buried.

For a number of years in the 1920s Lorca carried on an affair with avant garde artist Salvador Dali, six years Lorca's junior.  It was said to be a largely unrequited relationship with Lorca the frustrated pursuer.  The 2008 movie Little Ashes tells the story of their anguished relationship.  (Actor Robert Pattinson, of Twilight fame, portrayed Dali.)  After showing at a number of lesbian and gay film festivals in the U.S. it had a very limited release.  Although the movie was beautiful to look at reviews were largely tepid.