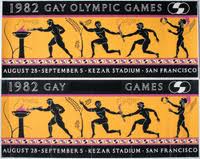 To dispel the notion that gay men and lesbians excel only in figure skating and softball, an international athletic competition for gay athletes was organized that encompassed an array of competitive sports similar to the Olympics - but for this event skill wasn't necessarily a qualifier - all were welcome.  Some events were unique to these games, i.e., ballroom dancing and figure skating with same-sex partners.  Fittingly, the first Gay Games were held in San Francisco (and the second Gay Games as well). The opening ceremonies took place on Aug. 28, 1982.  Like the Olympics the Gay Games are held every four years.  The founder of the Gay Games, Tom Waddell (pictured below), represented the U.S. in the decathlon in the 1968 Summer Olympics in Mexico City.  He died of complications from AIDS in 1987 at the age of 49.

These first Gay Games faced a number of hurdles:

A more recent controversy occurred in 2006 when a rift over financing resulted in two competing events: the sanctioned Gay Games in Chicago and the first World OutGames held in Montreal (the original choice of that year's Gay Games).  That year the two events were held just one week apart which reduced the number of participants at each competition.  To avoid such conflicts in the future the OutGames hold its event the year before the Gay Games. 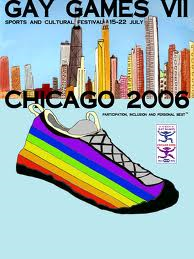 In addition to San Francisco and Chicago, other Gay Games have been held in other well-known gay destinations such as Amsterdam, New York City and Sydney.  By contrast, the ninth Gay Games in 2014 was held in Cleveland, Ohio.

A correction. The lawsuit against San Francisco Arts and Athletics was from the United States Olympic Committee, not the IOC.

Thanks Marc, I made the correction.