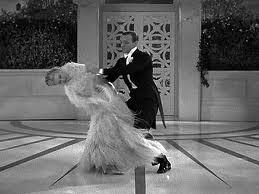 Top Hat was the fourth movie Fred Astaire and Ginger Rogers made together and is considered the most popular of their ten movies.  It opened on August 29, 1935 and became the highest grossing movie of that year, bringing in $3.2 million - comparable to $110 million in today's inflation-adjusted dollars (back then the average ticket price was 24 cents).  It included the Irving Berlin classics Cheek to Cheek and No Strings (I'm Fancy Free).

Their refined style and the glamorous settings they danced in make it easy to see why Fred and Ginger have gay fans.  I'm guessing this was true back then as well.  Many gay men identify with Rogers being twirled around in her gown and it's been said that the older Rogers was the inspiration for many drag queens.  And although I love to watch Astaire's effortless dancing, I find him oddly asexual and not sexy in the least.  He was too Upper East Side/effete for my taste.  (Gene Kelly was more to my liking.) 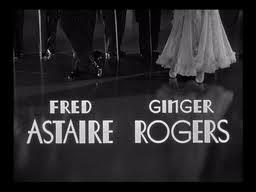 Watching Fred and Ginger was surely a great way to escape the grim reality of the Depression - as opposed to the glut of superhero movies during the first 15 years of the 21st century.

Maybe it was Kate Hepburn who said about Astaire and Rogers, "He gives her class and she gives him sex." Oddly enough, I always thought Astaire could be seduced, but not Kelly, so I had a crush on him. Fred never let his neck show, always had a tie, or as ragamuffin Finian, a kind of elegant rag ascot.

In "Finian's Rainbow" he does a solo step routine on an open railroad car, climbing crates of freight and the chorus (townspeople) are so much in adoration watching him perform. "Rainbow" got a bad rap when it opened in wide release. It was shot in regular Panavision and Warner Bros thought it tested so well, they roadshowed it 70MM. (Roadshows had advance tickets in advance for musicals with intermissions like "Star", "Funny Girl" and "My Fair Lady." Unfortunately, they didn't leave room for the 5.1 stereo track, so they chopped off part of the frame for the sound which meant the lower part of the frame got chopped off in order to keep the Wide-Screen proportions. All the critics said, "Here's a dancing musical but they don't show feet!" When Judith Crist wrote, "Fred Astaire should hang up his dancing shoes" he took it so seriously he never danced again on film except for a little dance number with Kelly in "That's Entertainment." The DVD corrects the missing bottom of the frame. The director is Francis Ford Coppola and he did a damned good job.