Jet Blue Flight Attendant Has Much Publicized Meltdown (August 9, 2010)
Why Do Gay Men Embrace "The Wizard of Oz"?

It was a bolt out of the blue, coming during the dog days of summer, when Jim McGreevey, the Democratic governor of New Jersey, revealed he was gay during a news conference on Aug. 12, 2004.  ("My truth is that I am a gay American.")  Then he announced he would step down because he had been carrying on an affair with a male aide who was the state's homeland security advisor - despite being unqualified.  During the few months McGreevey remained in office he had the distinction of being the first (and, so far, the only) openly gay governor in U.S. history. 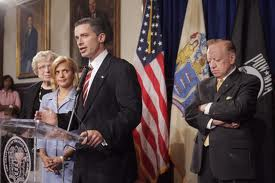 It was unfortunate that McGreevey's coming out was linked to a scandal.  And the months following his press conference were like a soap opera.  Stories came out about his liaisons at rest stops, and then during an ugly court fight with his wife, Dina Matos, over alimony McGreevey divulged that they carried on a menage a trois with another male aide (she denied it).  A few years later each spouse wrote tell-all memoirs (his: The Confession; hers: Silent Partner) and did the Daytime talk show circuit to tell their sides of the story.

For the governor, the story had somewhat of a happy ending as he found a well-off boyfriend (pictured below) relatively quickly, who he lives with in the "gay suburb" of Plainfield, NJ.  Then he sought refuge in the Episcopal church and studied for his Master of Divinity degree.  The Episcopal church turned down his bid to become an ordained priest so presently McGreevey advises prisoners in Newark.  And although it seems he's now on a righteous path away from the spotlight, a shroud of tawdriness still lingers. 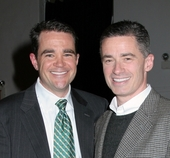 Meanwhile the sexy male aide who was the object of the governor's affections, Golan Cipel (who denied that the affair was consensual), returned to Israel and hasn't been heard from since.  Now that's a book I'd like to read. 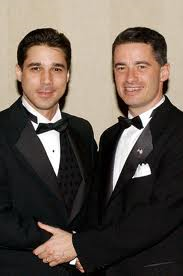 The Democratic NJ voters in the cieits are smart - they receive incredible benefits paid for by the suburbs.The Republican majority out in the northwest corner where I live certainly votes for our own interest - Scott Garrett (R) will be easily re-elected to Congress for instance. The problem is that this area of the state is too lightly populated to change statewide elections. Sussex, Warren, Morris, and Hunterdon counties are generally carried by the Republicans.It is the liberal voters from the eastern inner suburbs who are simply idiots. I don't know if they are just so rich that they don't care about the taxes. Maybe they suffer from white guilt. Whatever the case, Bergen, Hudson, Union, and Middlesex counties are run by the Dems. Some of our finest leaders such as Bob Torricelli, Jim McGreevey, and Bob Menendez come from the suburbs of this area. They always manage to swing the state Democrat when it matters.

For some reason, I still cringe when I read or hear the words, "I am a gay American."