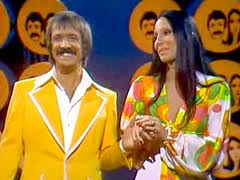 Four years had passed since Sonny & Cher last had a top-40 hit (The Beat Goes On).  And now CBS was giving these "has-beens" (Cher was 25) a summer variety show to air on Sunday night.  The Sonny & Cher Comedy Hour debuted on August 1, 1971 and got such a positive reception that the show was picked up by the network for its fall primetime lineup where it became a top-10 hit.  Thus began Sonny & Cher's storied comeback.  In the fall of that year Cher released the single Gypsies Tramps & Thieves and it was a huge hit, going to #1 on Billboard's Hot 100.  In the next three years she, or singing with Sonny, would reach the top-40 a total of nine times.  They were media darlings, helped greatly by their cherubic 2-year old daughter, Chastity, who they brought out at the end of every show.