Princess Diana's life was cut tragically short when she was killed in an auto accident in Paris late Saturday night on Aug. 31, 1997.  She was only 36 years old.  And although we're not British subjects, her death cast a pall over Labor Day weekend here in the U.S.  Indeed, grief over Diana's death reverberated throughout the world.

Diana was especially beloved by the gay community because of her AIDS charity work.  Ten years before her death she visited a newly opened shelter for gay men with AIDS and shook their hands - the first high profile celebrity not afraid to touch AIDS victims.  She further endeared herself to gay men because of her sense of style and the ability to rise above the adversity she encountered while married to Prince Charles.

The Pet Shop Boys wrote a beautiful dirgelike song (with a beat) called Dreaming of the Queen.  It tells of a dream in which Queen Elizabeth and Diana discuss, over a spot of tea, the futility of love.  It was from PSB's album Very which was released four years before Diana's death.  In 2000 I saw the Pet Shop Boys in concert at Radio City Music Hall where I saw them perform this song.  Behind them on stage was a video showing the hearse bearing Diana's coffin, its windshield wipers famously working overtime to clear flowers thrown by the millions along the funeral route. 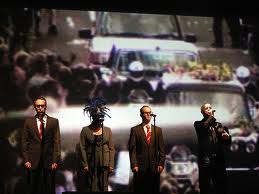 (I was spending Labor Day weekend out in Fire Island when I heard the news about Diana's death.  I've written a blog post about what I remember of that night on my history blog "History As You Experienced It".)