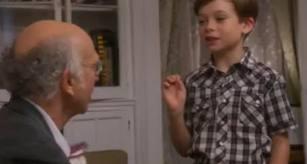 In the last episode of the HBO sitcom Curb Your Enthusiasm's eighth season (airdate: September 11, 2011) Larry had a very amusing encounter with his girlfriend's 7-year old son.  Larry was truly captivated by the boy, Greg, who was innocently flamboyant.  Larry referred to him as "pre-gay" because he had all the tendencies of a gay man but was too young to understand.  Because Greg had told Larry that he was a big fan of Project Runway and loved fashion, Larry gave him a sewing machine for his birthday.  Greg was thrilled but his mother (played by the wonderful Ana Gasteyer) was perplexed.  She turned to Larry and asked, "Are you trying to turn him gay?".  Larry, gave her a priceless look that communicated, "Isn't it fairly obvious he's well on his way?"

Not only did Greg remind me of the gay character Kurt from Glee, but of myself when I was a little kid (pictured).  I would flit around the house and enjoyed playing with my friend Diane's and Mary Kay's Barbie Dolls.  And I remember wrapping my sweater around my shoulders when I went with my family to church.  What I also remember is that no one in my family gave me grief.  Perhaps it was because I did some "boy" things as well, e.g. played with building blocks, airplanes and toy cars (which I enjoyed smashing with bricks.)  And I'm sure my dad was encouraged when I showed an interest in baseball as I approached my teen years.

Happily, especially in light of what happens in schools nowadays, I didn't face much in the way of harrassment from schoolmates - and this was in a factory town near Pittsburgh.  However, my 4th Grade teacher told my parents that, despite my good grades, I wasn't chosen to attend art school on weekends because she didn't consider me a serious child. (I think if she said that today she could be sued for hurting my feelings.)  Yes, I was a happy, high-spirited child, but it's a disposition I would have expected a teacher would welcome.  I don't know what she expected from a 10-year old boy, perhaps participate in a Civil Rights march?