First Issue of "The Advocate" Published (September 2, 1967)
"Take Me Out" Explores Impact of Openly Gay Baseball Player on Teammates (September 5, 2002)

No pun intended, but 1972 was seminal year if, like me, you were a teenage boy coming to grips with your same-sex attractions.  First, Burt Reynolds flaunted his stuff for a Cosmopolitan centerfold; then six months later Olympic swimmer Mark Spitz came along in his Speedo.  Spitz was the Mark Phelps of his generation, winning seven gold medals at the Summer Games in Munich.  What was great about him was that you could openly ogle him while watching the Olympics in the living room with your parents.  If you found these tantalizing displays of Mark and Burt's "packages" arousing you knew it was likely you were gay. 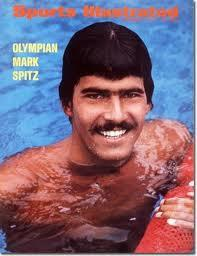 Although Spitz and Reynolds both had black hair and mustaches, the hairy chested 36-year-old Reynolds had a lascivious, bad boy grin while the smooth 22-year-old Spitz's smile evinced the innocence of the boy next door.  Gay men benefited from the early feminists who believed that men could be objectified as sex objects for the titillation of women just as their sisters had been subjected to since the beginning of time. 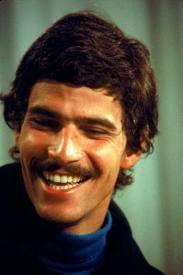 Spitz was the first male Olympic star to become a sex symbol.  Four years before the famous Farrah Fawcett poster was plastered in boys' dorm rooms, an equally popular poster of Spitz was available for his female fans.  If you were lucky you had girlfriends who owned the poster.  This display of beefcake for public consumption was long before overt displays of celebrity skin became the norm.

Personally, my first real crush on an Olympic swimmer was Rick Carey, the backstroker who won 3 gold medals in the 1984 Olympics in L.A. It appears he's now an IT geek (more reason to like him) working for one of the big financial firms in London.