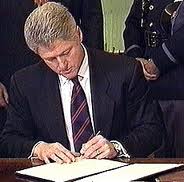 It was bad enough that President Clinton began his first term by enacting the misguided "Don't Ask, Don't Tell" policy, but as the end of this term approached he signed into law the Defense of Marriage Act on Sept. 21, 1996 (just in time for Election Day).  It allowed states to refuse recognition of same-sex marriages performed in other jurisdictions and also prevented the federal government from recognizing the validity of such marriages.  Sixteen months later we'd see how the president defended the sacred institution of his "traditional" marriage when his philandering with Monica Lewinsky was uncovered. 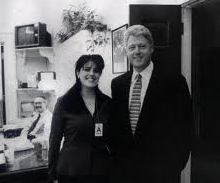 After the signing of DOMA, thirty-two states (accounting for nearly 80% of the US population) added amendments to their constitutions defining marriage as the union between a man and woman.  Nonetheless, eight years later Massachusetts became the first state to legalize and perform the first gay marriages.

Then in 2011 the political landscape shifted dramatically when 1) the US military's noxious "Don't Ask Don't Tell" policy was repealed and 2) state supreme courts in Massachusetts and California found DOMA unconstitutional.  This was followed in 2012 by President Obama, in the midst of his re-election campaign, announcing his support of same-sex marriage.  In the spring of 2013 Bill Clinton expressed regret over the signing of DOMA, which was quickly followed a few months later by the Supreme Court overturning DOMA and mandating the federal government recognize same-sex marriage in the states where it was legal and provide all benefits previously available only to opposite-sex couples (even in those states where it was still banned).  Finally, in June 2015 the Supreme Court overturned bans on same-sex marriage in 17 states, making it legal nationwide. 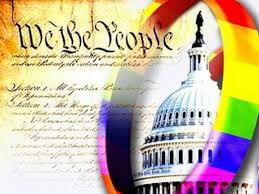