The Powerhouse of Gay Talent Behind "West Side Story" (September 26, 1957)
What Tickles a Gay Man's Funny Bone

The medical drama Dr Kildare debuted on NBC's primetime schedule on Sept. 28, 1961.  Starring 27-year-old heartthrob Richard Chamberlain, the show aired on Wednesdays at 8:30 and lasted for five seasons.  It was followed at 9:30 by another new show, the sitcom Hazel.  (And at 10:00, Sing Along with Mitch.)  Kildare was a hit and finished the season as the ninth most popular show (Hazel was #4). 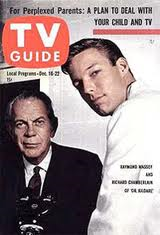 Although Chamberlain was certainly a handsome young man, I was more drawn to actor Vince Edwards, who also played a doctor on Ben Casey, a competing medical drama on ABC which aired on Mondays (but not as popular).  Edwards was more swarthy and brooding while Chamberlain was a cool WASP.  (My attraction to Edwards' type would continue through adulthood.)  However, at the time I was just five and had no conception about what a same-sex attraction suggested.  (I wrote about other same-sex attractions of my youth in the post Boyhood Crushes on Male TV Stars of the 1960s.)

It was years before I heard any mention about Chamberlain being gay.  I first heard some talk about his orientation when he starred in the popular 1982 TV mini-series Shogun.  Chamberlain caused a bit of a stir a few years ago when he commented in an interview that he wouldn't advise TV actors to come out.  Chamberlain is now 80 (as of July 2014).  Vince Edwards died in 1996 at the age of 67. 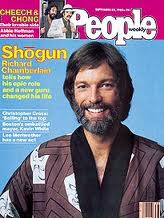 Here's a cheesy tribute to Chamberlain from his Dr. Kildare years that I found on You Tube:

I'm with you on this one Rob. I'd take (literally) Vince Edwards over Richard Chamberlain any day!