"Take Me Out" Explores Impact of Openly Gay Baseball Player on Teammates (September 5, 2002) 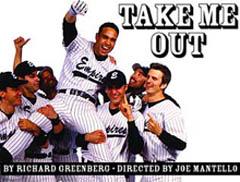 My most lasting memory of the 1994 revival of the musical Damn Yankees was its jaunty shower scene while the players sang Heart.  Take Me Out, another show I saw with a baseball theme, also had a memorable shower scene, but with a completely different, and hotter, tone.  It opened off-Broadway at the Public Theater on September 5, 2002.

Whereas the shower scene in Damn Yankees had each player in separate shower stalls with doors that restricted the view between each player's calves and waist (while they sang the song Heart), Take Me Out's scene took place in an open shower with two totally nude ballplayers (except for shower shoes) having a somewhat sexually charged conversation as they soap up.  It was largely because of this scene that gay men who weren't the least bit interested in baseball eagerly lined up to get tickets.

Six months after opening, Take Me Out went to Broadway where it won the Tony Award for Best Play - and openly gay actor Denis O'Hare won for Best Performance by a Featured Actor in a Play.  (Sunjata also received a nomination.)