LGBTQ History Timeline: The Newsworthy, the Frivolous & the FABULOUS
Vikki Carr's Campy "It Must Be Him" Reaches the Top-10 (October 1967) 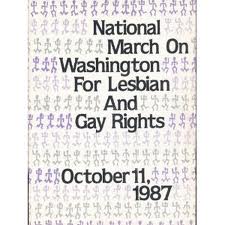 The second National March on Washington for Lesbian & Gay Rights was held on Sunday, October 11, 1987 (the first was on October 14, 1979).  It was in response to 1) the lack of AIDS funding by the federal government and 2) the Supreme Court's decision the previous year, in Bowers v. Hardwick, that upheld sodomy laws.  It was also the first time that the AIDS Memorial Quilt was displayed (on the Mall).

I hadn't planned on participating but I ended up being in DC on that day.  On Saturday evening I had a date with a new boyfriend I met a few weeks earlier and, much to my surprise, we flew down to Washington.  It was my first time there.  Although we missed the unveiling of the AIDS quilt (it happened on Saturday afternoon), we did attend the rally, on a cool and overcast Sunday.  Afterwards, we quickly stopped into a few clubs nearby (Tracks and Lost and Found) and then flew back on the Eastern shuttle to New York in the evening.  We were there for less than 24 hours. 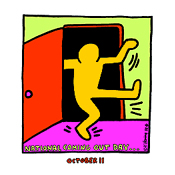 The following year National Coming Out Day was organized and it was scheduled on October 11 to commemorate the 1987 March.  The next large March on DC was in 1993.  This time, however, I watched it on C-Span.  There have been two other political rallies since then, in 2000 and 2009.

As for me and my date, we dated for about four months.  I still bump into him on Fire Island with his partner, who he met a few months after we stopped seeing each other.