The romantic comedy Pillow Talk, starring Doris Day and Rock Hudson, it opened the weekend of October 7, 1959.  It would become the second highest grossing film of the 1950s, behind another movie from 1959, Ben Hur.  The movie also co-starred Tony Randall as a supercilious skirt chaser and Thelma Ritter as as a drunken housekeeper.  Day and Ritter both received Oscar nominations. 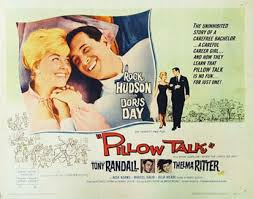 Doris plays Jan Morrow a successful interior decorator and Hudson plays Brad Allen a womanizing Broadway composer.  Jan quite dislikes Brad because they share a telephone "party line" and whenever she tries to make a call he's on it talking to a different women.  When Jan and Brad meet face-to-face they fall for each other - but Jan doesn't know it's Brad because he tells her that he's Rex Stetson from Texas. 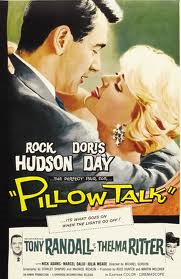 When Jan later brags to Brad about Rex during yet another party line interruption Brad plays with Jan by planting the seed that Rex is a mama's boy and maybe a bit "light in the loafers" (ah, the irony!).  Surprise, surprise it all works out and in the end boy gets girl.  The movie is perhaps most famous for the split-screen bathtub scene in which Day and Hudson's characters chat flirtatiously on the phone while each is taking a bubblebath.  Considered risque by standards of the bland 1950s, even today it's kinda hot.  It most surely had gay men back then in a tizzy.

There's also a delightfully corny scene in a restaurant around a piano where Doris sings a silly song titled Roly Poly.  Crowd participation ensues along with inane hand clapping between Day and Hudson.

At the time Doris was 35 and Rock was one month away from his 34th birthday.  This was the first of three movies they'd do together.  And she was there at his side offering support to Rock during his final months in 1985 when he was battling AIDS.