It was well known that Bette Davis and Joan Crawford didn't like each other, so it would seem that little acting was required when they starred opposite each other as the battling, spinster Hudson sisters in the campy Whatever Happened to Baby Jane?  By the time of the movie's release in the fall of 1962, both Oscar-winning actresses were in the sunset of their careers - Davis was 54 years old, Crawford 57.  How appropriate that the movie opened on Halloween.

The movie was a hit, the fourth most popular film of 1962.  (Its $9 million gross is comparable to about $100 million in today's inflation adjusted dollars.)  Davis was nominated for an Oscar in the Best Actress category but lost to Anne Bancroft, who won for her role in The Miracle Worker.  The enterprising Crawford made her self available to Bancroft and accepted the Oscar on her behalf, triumphantly breezing down the aisle past Davis to accept the statue as if it were hers!

One of my all-time favorite movie lines is from Baby Jane.  After Joan's character, Blanche, bemoans how Jane wouldn't treat her so poorly if she weren't crippled and in a wheel chair, Jane coolly replies, "but you are, Blanche".  I've found that line very useful in countless situations where someone is complaining about their lot in life. 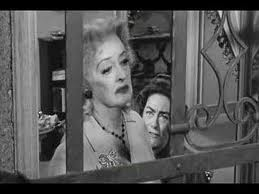 In March 2017 an eight-episode series about the making of the movie aired on FX, starring Susan Sarandon as Davis and Jessica Lange as Crawford.  It was directed by Ryan Murphy.  At first glance, upon seeing the magazine cover below, I thought the actress playing Joan was Caitlynn Jenner! 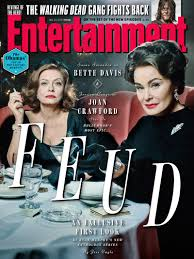