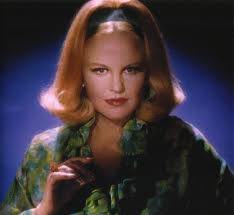 One of the most delightfully peculiar songs to hit the charts has to be Peggy Lee's Is That All There Is?  It entered the top 40 on Billboard's Hot 100 Singles Chart in early October 1969 and was Lee's first song to chart since Fever went to #8 in 1958.  Peaking at #11 in November, Is That All There Is? tells a tale of life's disappointments that is so maudlin it's hard not to chuckle when you listen to it.  It certainly has a secure spot in the "Camp Hall of Fame".  I remember hearing the song on Pittsburgh radio station KDKA after I got home from school.  At the time I was 12 and had no appreciation for camp.  I just thought it was a very peculiar, albeit somewhat catchy, tune.  Thinking back, the song is even funnier considering it was released during the psychedelic late '60s.  Click here to view a video clip.

Many years later, in April of 2015, the song was used on the drama Mad Men in the opening and closing segments of the first episode (titled "Severance") of the show's final season.

Tags: camp, Fever by Peggy Lee, Is That All There Is?, Peggy Lee, song used in the first episode of season 7 of Mad Men, songs of 1969