Two months after Rock Hudson revealed that he was battling AIDS, the actor died from its ravages on October 2, 1985.  He was one month shy of his 60th birthday.  Doris Day and Elizabeth Taylor, two of his former co-stars, stood by his side and provided emotional support in his final months.  Hudson's death was somewhat of a one-two punch for the general public because 1) he had AIDS and 2) it was revealed he was gay. 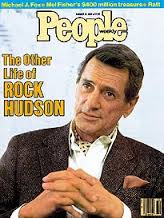 Hudson's death began the next chapter in the nation's unfolding AIDS nightmare because, after four years, it finally put a face on the deadly scourge.  Then, when celebrities such as Arthur Ashe, teenager Ryan White and actress Amanda Blake (Gunsmoke's "Miss Kitty") succumbed, it brought home the message that heterosexuals weren't immune.  Later, Magic Johnson and Greg Louganis would become ambassadors for living with HIV (both revealed they tested positive for HIV in the 1990s).  Both are still alive and thriving.

So Rock Hudson is now probably best known, especially among younger generations, for dying of AIDS rather than being one of the most popular movie stars of the late 1950s and early 60s.  Shortly before he died Hudson addressed this legacy and said he was fine with it if it increased awareness of the disease and the importance of protection.  Between the time of Hudson's death and the early 1990s well known gay men in the fields of fashion, acting, music and choreography would be among the thousands to die of AIDS.  Many would be considerably younger than Hudson.  1986 saw the death of fashion designer Perry Ellis.  And this was the only beginning as Liberace, Freddie Mercury, Michael Bennett, Robert Reed, Alvin Ailey and Robert Mapplethorpe were some of the other famous faces struck down in their prime.