"Twilight of the Golds" Opens on Broadway, Addresses Homophobia (October 21, 1993)

If a pre-natal test existed that could indicate the sexual orientation of a baby, how might expectant parents, even those accepting of gay men and women, react if it showed their baby had a predispositon to being gay?  That was the thought provoking premise of the play The Twilight of the Golds which had its Broadway opening on October 21, 1993. 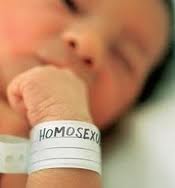 The play follows the Golds, a Jewish family with two adult children - a married daughter who is pregnant and a gay son.  After the daughter learns that the son she is carrying has the "gay gene" she considers having an abortion.  Her brother wonders if his mother, who has never embraced his homosexuality, would have aborted him if she knew in advance he was gay.  Apparently the play was better in theory than in practice as it was skewered by Ben Brantley of the New York Times and it closed after a month.

Among the play's cast was Jennifer "Dirty Dancing" Grey (as the daughter) and David Groh (as the Gold patriarch), who was most famous for playing Rhoda Morgenstern's husband in the popular 70's sitcom Rhoda.  Four years later the play was made into a movie starring Faye Dunaway, Brendan Fraser, Jennifer Beals and Rosie O'Donnell.  (It has a different ending from the Broadway production.)

Of course, quite a few other gay-themed plays have met with more success on Broadway.  Boys in the Band; The Fifth of July; Bent; The Normal Heart; Angels in America (which also opened in 1993); Take Me Out; The Temperamentals (left); and Next Fall are some that have met with various degrees of acclaim.