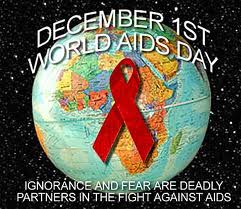 Ways to memorialize AIDS victims and raise awareness among the general public began in 1985 with the first AIDS Walk in Los Angeles followed by New York City's in 1986.  In 1987 the National AIDS Memorial Quilt was unveiled in D.C.  And on December 1, 1988 the effort continued with the first observance of Worlds AIDS Day.  It is now held every Dec. 1, with proclamations issued by the president as well as the pope.  Additionally, candlelight vigils and the reading of names are held worldwide while in New York the lights of Broadway and other city landmarks are turned off in observance.

In 1991 Entertainment Weekly observed World AIDS Day by publishing "Faces of AIDS", mini-obits of people in the entertainment industry who had died in the previous 12 months.  67 names were listed - their average age was only 44.  Seeing all of the year's deaths amassed together was sobering and impactful.  Three years later the number had doubled.  EW published this as an annual feature through 1997 - when the number of persons listed fell significantly - to 24 (due to protease inhibitors and changed sexual habits).

A few weeks after the 1st World AIDS Day was observed ABC World News Tonight anchor Max Robinson and disco icon Sylvester would be the next personalities to succumb to the disease.  And the following year famed choreographer Alvin Ailey's death from AIDS coincided with the second World AIDS Day.