Stephen Sondheim's "Into the Woods" Opens on Broadway (November 5, 1987)

Stephen Sondheim's musical Into the Woods opened the night of Nov. 5, 1987.  Starring Bernadette Peters, it would become Sondheim's third longest running show (764 performances) - surpassed only by A Funny Thing Happened on the Way to the Forum and West Side Story.  It was also one of his few shows to open in the Fall.  Although Phantom of the Opera would win the Tony Award for Best Musical of the 1987/88 Broadway season, Into the Woods was bestowed that honor at the Drama Desk Awards (and Joanna Gleason won the Tony for Best Actress in a Musical).  And in 2002 a revival was staged starring Vanessa Williams which was awarded the Tony for Best Revival of a Musical.   And in December 2014 a film version of the musical is being released on Christmas Day, starring Meryl Streep, Johnny Depp, Chris Pine, Anna Kendrick, Emily Blunt, Tracey Ullman and Christine Baranski. 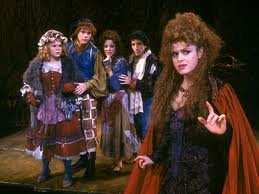 Besides the song Children Will Listen I got a kick out of Witch's Rap, little ditty the witch (Bernadette Peters) spoke when she made her entrance at the beginning of Act One.  Although I didn't see the show or its revival I watched a performance that aired on PBS in 1991 (that's also how I saw A Little Night Music).  This production of Woods is available on DVD.

This show is so beautifully written and well acted in this recording. Children Will Listen- is a modern day classic.