A Look Back at Gay History, Year-by-Year
Ron Reagan Jr. Gets Married, Eyebrows Are Raised (November 24, 1980)

Highlights of LGBT History During 2012

Feb 5, 2012 - Madonna can check off "Performing during halftime at the Super Bowl" from her bucket list.

April 5, 2012 - Despite tepid reviews, Ricky Martin is a big draw in the Broadway revival of Evita.  He plays the role of the hip-swiveling narrator, Che.

May 9, 2012 - In an interview with ABC News President Obama announces his support of same-sex marriage.  It followed by a few days Vice President Joe Biden's support, expressed during an appearance on Meet the Press. 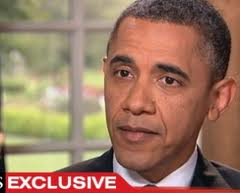 May 15, 2012 – Gay gossip-blogger Perez Hilton makes a cameo on tonight’s episode of Glee, appearing as a judge at the Nationals competition for acapella groups.

May 17, 2012 - The off-Broadway play Cock opens.  Newspaper ads for the showrequire its title to be listed as either C**k or Cockfight Play.

June 7, 2012 - Moscow's City Court upholds a lower court's ruling banning all gay pride events in the city for the next hundred years.

July 2, 2012 - CNN reporter and talk show host Anderson Cooper finally comes out, but it is more or less a non-story. 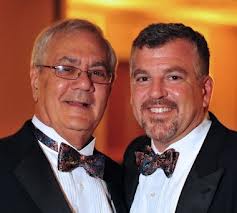 July 15, 2012 - The mini-series Political Animals, starring Sigourney Weaver as a Hillary Clinton-like Secretary of State with a drug-addled mess of a gay son, debuts on USA Network.

July 23, 2012 - Former astronaut Sally Ride, the first American woman to be launched into space, dies at the age of 61.  Upon her death it is revealed that she was a lesbian with a partner of 27 years.

Sept 16, 2012 - For the second time in three years Eric Stonestreet, the straight actor who plays one of the gay daddies on the ABC sitcom Modern Family, wins the Emmy for Best Supporting Actor.

Sept 29, 2012 - California is the first state to ban reparative therapy on minors to "cure" them of their homosexuality.

Oct 5, 2012 - Good Morning America weatherman Sam Champion comes out on the air and announces his engagement to his Brazilian partner.

Oct 15, 2012 - 24-year-old Rob Wilson is the first piece of male eye candy to show off prizes on CBS's long-running game show The Price is Right.

Oct 18, 2012 - On tonight's episode of Glee Sarah Jessica Parker leads the gang at Rachel and Kurt's loft in a delightful rendition of Scissor Sister's song Let's Have a Kiki mashed up with Turkey-Lurkey Time from the Broadway musical Promises, Promises.

Nov 6, 2012 - A momentous election day for LGBT Americans as voters in three states - Maine, Maryland and Washington - vote in favor of same-sex marriage.  Meanwhile, in Wisconsin, Congresswoman Tammy Baldwin becomes the first openly gay candidate to be elected to the U.S. Senate.

Nov 14, 2012 - On tonight's episode of Modern Family, Matthew Broderick makes a guest appearance as a gay man who meets metrosexual Phil at the gym and thinks Phil's invitation to watch football at his home is a date.

Nov 20, 2012 - Kevin Clash, the puppeteer who was the voice of popular Sesame Street character Elmo for 28 years, resigns amidst a sex scandal involving two young men he had relationships with in the past when they were teens.

Dec 18, 2012 - Nate Silver, the gay stats guru who made a name for himself for accurately predicting the outcome of the presidential election in his FiveThirtyEight column in the New York Times, is named Out Magazine's Person of the Year.