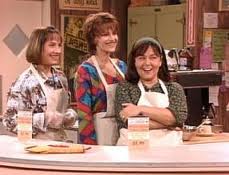 On the November 10, 1992 episode of Roseanne, Roseanne's friend Nancy, played by comic/actress Sandra Bernhard (pictured in the middle), came out as a lesbian.  This was a TV milestone as Nancy became the first regular lesbian character in a sitcom.  It followed by 15 years Billy Crystal's pioneering role as a gay male character (Jodie Dallas) on the ABC sitcom Soap.

I've always confused Bernhard's name with that of famed 19th century French actress Sarah Bernhardt.  Physically, she reminds me of a more telegenic and less sour version of lesbian author/pundit Fran Lebowitz (who was part of the zeitgeist of the 70s/80s).  In the fall of 1994 I saw Bernhard's one-woman show up in Boston at the Orpheum Theatre.  I've also crossed paths with her in my neighborhood - a few times at Crunch Fitness (working with a trainer) and once at Balducci's (now Citarella) where she was wearing a dazzling white track suit. 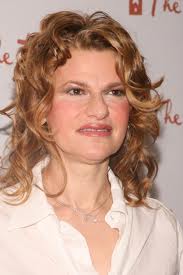 Bernhard was somewhat of an acquired taste but she became a gay icon in the late 80s and through the following decade.  Her star rose during the five or six years she and Madonna were "gal pals" (she made a cameo in Madge's 1991 documentary Truth or Dare).  They were always teasing about a lesbian relationship so Bernhard's sapphic role in Roseanne wasn't a stretch.

Roseanne was a perfect reflection of its star, i.e. "ballsy", and a pioneering show when it came to gay characters.  At the luncheonette where Roseanne's character worked, she had a gay boss, Leon (played by Martin Mull), who had a commitment ceremony and talked of adopting a child.  Also, Roseanne's mother, Bev, came out in the show's last season.  However, the biggest fuss was made during the 1993/94 season when Nancy's girlfriend (played by Mariel Hemingway) kissed Roseanne at a lesbian bar.  Pretty progressive stuff for the blue collar heartland (Lanford, Illinois), wouldn't you say?