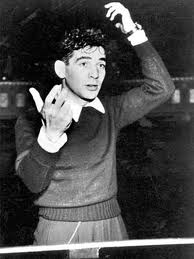 On Nov. 14, 1943 25-year-old Leonard Bernstein became the first American to conduct the New York Philharmonic Orchestra.  At the time Bernstein was the assistant conductor and was called upon at the last minute (without the benefit of rehearsal) to fill in for the conductor who had been taken ill with the flu.  The concert was at Carnegie Hall and broadcast to a national radio audience.  13 months later Bernstein showed off another talent when On the Town opened on Broadway, a show for which he composed the music.

Like other gay men of his generation (e.g., Stephen Sondheim, Edward Albee, Malcolm Forbes, Philip Johnson) Bernstein led a discreet personal life that was largely kept from the public eye.  To learn more about Bernstein, both professionally and privately, the blog Gay For Today does a good job of covering all the bases.  And, of course, Amazon has a huge inventory of all things Bernstein.