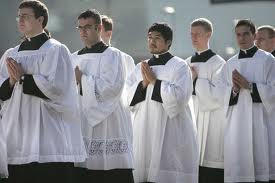 To quell outrage over the cover-up of child abuse in the US by Roman Catholic priests, the Vatican scapegoated gay men by banning their admission to seminaries.  However, the ban that was announced on Nov. 29, 2005 was akin to rescinding an invitation to a club that lost its popularity long ago.  Even before this edict was issued only half as many men were entering seminaries as they were in 1965 (while the number of Roman Catholics increased by 41%.)  After peaking in 1975 the number of ordained priests had fallen by more than 30%.  Today the typical priest is older than 60, with those over the age of 90 outnumbering clergy younger than 30.

To address this decline the Vatican thought it wise to bar a contingent of young men who historically comprised a significant portion of priests - while continuing to refuse ordination of women or married men.  And despite findings to the contrary, the Church has knowingly deceived its faithful by conflating homosexuality with pedophilia. 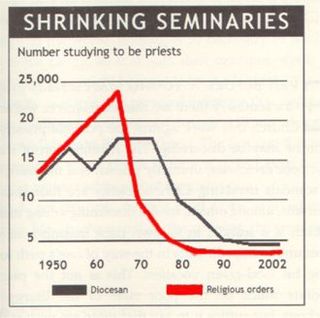 The Roman Catholic Church has been greatly impacted by gay liberation.  Previously, as long as homosexuals were pariahs they provided a steady supply of seminarians as they looked to the priesthood as a refuge.  (Shortly after I came out to my dad he told me I would have made a great priest.  That's when I realized that for those of his generation gay men were viewed as being useful if they became priests.)  But as gay men began to live more openly the priesthood was no longer the only viable career option to consider.  To help fill this void more and more priests are being brought from Africa, home to virulently homophobic forms of Christianity. 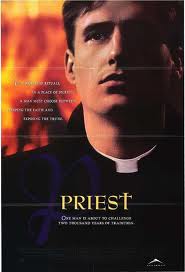 The 1995 movie Priest looked at the various conflicts encountered by a young, questioning priest (with a penchant for sneaking out to a nearby leather bar).  Although set in Ireland the issues are similar to those encountered in the US.

I loved the movie PRIEST. Back then my BF and I always saw a ll of the good Indy films. This one was particularl good. The leads went on to some fame as one is in a Law & Order series and the other Robert Carlisle starred in The Full Monty and continues as a character actor. he is destined for an Oscar one day!