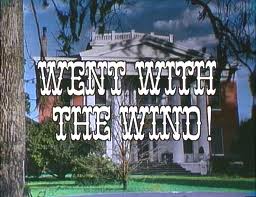 The Carol Burnett Show aired on CBS for 12 seasons (1967-78).  During these years more than 2,000 skits were performed, with perhaps the best one of all airing on November 13, 1976.  It was a take-off of Gone with the Wind that was titled Went with the Wind!  Its airing happened to coincide with the network TV premiere of GWTW which aired on NBC earlier in the week (and was viewed by nearly 60 million people).

Perhaps the high point of the skit is when Scarlett (played by Burnett) descends the stairs in a gown made from curtains - with the curtain rod still attached (and worn across her shoulders).  After Rhett (played by Harvey Korman) compliments her on her new ensemble Scarlett replies: "I saw it in the window and I just couldn't resist it".  Such a delightful piece of camp - and an inspiration for drag queens (or those aspiring to be) for years to come.

(If this piqued your interest in delving further into the Carol Burnett Show archives doubleclick here to see everything Amazon has to offer.)