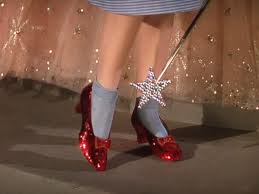 CBS aired the Wizard of Oz on TV for the first time on the evening of Saturday, Nov. 3, 1956.  Unlike the theatrical release, which magically switched from black and white to color when Dorothy opened the door of her house after it landed in Oz, the TV telecast was shown totally in b/w.  Three years later the broadcast of the movie became a cherished annual event (when it began airing on Sunday).  In 1999 the movie was acquired by Turner Entertainment where it has aired on its various cable networks ever since. 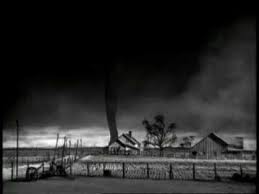 Although I was well acquainted with the plot, during every viewing I held out hope that Dorothy might make it to the storm cellar in time.  And while many other little boys with gay leanings may have been fascinated by the ruby slippers I found myself enthralled by the tornado and hoped that one day one would strike my neighborhood (perhaps its phallic shape also had a subliminal effect).  Thus began my fascination with meteorology, which almost lead me to get a degree in it (instead I switched my major to Advertising upon determining I wasn't cut out for countless courses in Physics).

Another beloved movie classic from 1939, Gone With the Wind, wouldn't air on network TV until 1976.

Tags: Gone With the Wind, Judy Garland, the tornado in Wizard of Oz, TV history, Wizard of Oz

The telecast done by CBS on November 3, 1956 was in fact telecast in color, despite the fact that CBS was a bit cool to the use of the RCA/NBC/Sarnoff-backed NTSC compatible color system. I watched it that year on a 21-inch RCA Model 21CT55 21-inch receiver, which I found fascinating. I was living in Columbus, Ohio at the time and the program was broadcast on its CBS affiliate, WBNS-TV Channel 10 (which still is to date). The station has been a pioneer in new technologies, in that it broadcast the CBS field-sequential color (not black-and-white-compatible) programs in 1951 and pioneered local broadcasting of the ATSC high-definition broadcast system that we have today.

Thank you Charles - so much for me getting my information from Wikipedia! That's so cool that you experienced the first telecast. Your recollection certainly enhances this post.