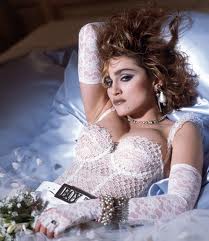 I remember being at an alternative/new wave club the night of the MTV awards. The club was showing the awards, but without sound. Most of us were watching the show and laughing at Madonna, wondering what the hell she was doing. At this point, even though Madonna had frequented a lot of the clubs we hung out at, we had already cooled to her and saw this as "selling out." Little did we realize at that point where Madonna's career would go!