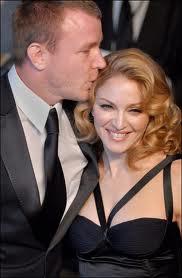 Madonna's first marriage was to actor Sean Penn in 1985 and it took place on her 27th birthday (and the day before his 25th).  They were married for a little more than two years.  Her second marriage was to British movie director Guy Ritchie, ten years her junior, and the ceremony was held on December 22, 2000 at a castle in Scotland.  It was during this time Madge fashioned a British accent that was widely ridiculed on both sides of the Atlantic.

Madonna and Ritchie divorced in 2008.  Commenting on the marriage, Ritchie reportedly confided that he had "stepped into a soap opera".  They had two children together: son Rocco was born four months before the wedding and son David was adopted from the African nation of Malawi.  After their divorce Madonna adopted a second child from that country, daughter Mercy (both adoptions were steeped in controversy).  Madonna also has a 17-year-old daughter, Lourdes, fathered by her former personal trainer, Carlos Leon.

A Golden Globe Winner for "Evita"