Queer as Folk originated in the UK and in December 2000 a US version began airing Sunday night on Showtime.  It was set in Pittsburgh, but the city didn't embrace it.  For instance, its iconic football team, the Steelers, wouldn't allow any display of team insignia on clothes or in bar/club scenes.  Perhaps it was because the city was depicted in the show as a mini-Sodom - and gayer than San Francisco or New York.  I told friends that if the city was really this gay I would never have moved away.  (In reality it didn't hold its first gay pride parade until a few years after the series concluded.)  Pittsburgh was chosen in keeping with the UK's version which was set in the gritty industrial city of Manchester.  In actuality the show was mostly filmed in Toronto. 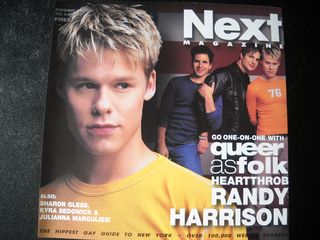 Although I found plenty in the series to criticize (e.g., too much sex; Brian's sex appeal escaped me; Michael's supportive mom Deb was a bit crass), I tried not to miss an episode (it was the reason I signed up for pay cable).  And it was refreshing to see unvarnished gay lives represented, bringing back memories of when Tales of the City aired on PBS in 1994.  Of the show's ten main characters, I liked Emmett Honeycut the best.  As a former Pittsburgher I found Michael, his mom Deb (played by Sharon Gless) and Uncle Vic, in their depiction of blue collar residents, to be the most authentic.  Perhaps because I was older than most of the show's characters by at least 10 years I identified most with Uncle Vic.

I also liked the show's selection of music which was made available on a number of CD compilations.  One song I especially liked, Straight to ... Number One, was from the first season and was played during a hot encounter between Brian and Justin (each episode was guaranteed to have a few such steamy scenes).

The show aired for five seasons and had 83 episodes (compared to just ten for the UK version).  And in 2004 Showtime began airing a distaff version of QAF called The L Word (QAF did have a lesbian couple).  It had 70 episodes that aired over 6 seasons.